The Conservative Slut's Fair Game, but the Liberal Slut Isn't? 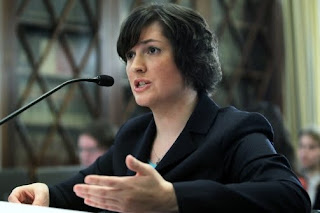 Rush Limbaugh Isn’t the Only Media Misogynist
Rush Limbaugh apologized on Saturday for calling a Georgetown Law student a slut for testifying about contraception and starting a firestorm of outrage. Kirsten Powers says the liberals who led the charge need to start holding their own side accountable.
by Kirsten Powers  | March 4, 2012 10:00 AM EST

Did you know there is a war on women?

Yes, it’s true. Chris Matthews, Keith Olbermann, Bill Maher, Matt Taibbi, and Ed Schultz have been waging it for years with their misogynist outbursts. There have been boycotts by people on the left who are outraged that these guys still have jobs. Oh, wait. Sorry, that never happened.

Boycotts are reserved for people on the right like Rush Limbaugh, who finally apologized Saturday for calling a 30-year-old Georgetown Law student, Sandra Fluke, a “slut” after she testified before congress about contraception. Limbaugh’s apology was likely extracted to stop the departure of any more advertisers, who were rightly under pressure from liberal groups outraged by the comments.

Let it be shouted from the rooftops that Rush Limbaugh should not have called Ms. Fluke a slut or, as he added later, a “prostitute” who should post her sex tapes. It’s unlikely that his apology will assuage the people on a warpath for his scalp, and after all, why should it? He spent days attacking a woman as a slut and prostitute and refused to relent. Now because he doesn’t want to lose advertisers, he apologizes. What’s in order is something more like groveling—and of course a phone call to Ms. Fluke—if you ask me.

But if Limbaugh’s actions demand a boycott—and they do—then what about the army of swine on the left?

During the 2008 election Ed Schultz said on his radio show that Sarah Palin set off a “bimbo alert.” (http://palinsexismwatch.blogspot.com/2008/09/radio-host-ed-schultz-bimbo-alert.html) He called Laura Ingraham a “right-wing slut.” (He later apologized.) He once even took to his blog to call yours truly a “bimbo” for the offense of quoting him accurately in a New York Post column.

Keith Olbermann has said that conservative commentator S.E. Cupp should have been aborted by her parents, apparently because he finds her having opinions offensive. He called Michelle Malkin a “mashed-up bag of meat with lipstick.” He found it newsworthy to discuss Carrie Prejean’s breasts on his MSNBC show. His solution for dealing with Hillary Clinton, who he thought should drop out of the presidential race, was to find “somebody who can take her into a room and only he comes out.” (http://www.huffingtonpost.com/2008/04/25/keith-olbermanns-idea-for_n_98557.html) Olbermann now works for über-leftist and former Democratic vice president Al Gore at Current TV.

The grand pooh-bah of media misogyny is without a doubt Bill Maher.

Left-wing darling Matt Taibbi wrote (http://trueslant.com/matttaibbi/2009/04/15/teabagging-michelle-malkin/) on his blog in 2009, “When I read [Malkin’s] stuff, I imagine her narrating her text, book-on-tape style, with a big, hairy set of balls in her mouth.” In a Rolling Stone article about Secretary of State Clinton, he referred to her “flabby arms.” (http://www.observer.com/2008/04/erica-jong-and-matt-taibbi-in-heated-huffpo-flabflap/) When feminist writer Erica Jong criticized him for it, he responded by referring to Jong as an “800-year old sex novelist.” (Jong is almost 70, which apparently makes her an irrelevant human being.) In Taibbi’s profile of Congresswoman and presidential candidate Michele Bachmann he labeled her “batshit crazy.” (Oh, those “crazy” women with their hormones and all.)

Chris Matthews’s sickening misogyny was made famous in 2008, when he obsessively tore down Hillary Clinton for standing between Barack Obama and the presidency, something that Matthews could not abide. Over the years he has referred to the former first lady, senator and presidential candidate and current secretary of state as a “she-devil,” “Nurse Ratched,” and “Madame Defarge.” Matthews has also called Clinton “witchy,” “anti-male,” and “uppity” and once claimed she won her Senate seat only because her “husband messed around.” (http://www.politico.com/news/stories/0108/7961.html) He asked a guest if “being surrounded by women” makes “a case for commander in chief—or does it make a case against it?” At some point Matthews was shamed into sort of half apologizing to Clinton, but then just picked up again with his sexist ramblings.

Matthews has wondered aloud whether Sarah Palin is even “capable of thinking” and has called Bachmann a “balloon head” (http://www.huffingtonpost.com/2011/01/25/chris-matthews-michele-bachmann-balloon-head_n_814033.html) and said she was “lucky we still don’t have literacy tests out there.” Democratic strategist Jehmu Greene, who is the former president of the Women’s Media Center, told (http://articles.businessinsider.com/2011-01-31/entertainment/30080416_1_michele-bachmann-chris-matthews-bully) Fox News’ Megyn Kelly in 2011 that Matthews “is a bully, and his favorite target is women.” So why does he still have a show? What if his favorite target was Jews? Or African-Americans?

But the grand pooh-bah of media misogyny is without a doubt Bill Maher—who also happens to be a favorite of liberals—who has given $1 million to President Obama’s super PAC. Maher has called Palin a “dumb twat” and dropped the C-word (http://www.mediaite.com/tv/bill-maher-calls-sarah-palin-the-c-word-during-his-stand-up-act/) in describing the former Alaska governor. He called Palin and Congresswoman Bachmann “boobs” and “two bimbos.” He said (http://www.rawstory.com/rawreplay/2011/06/bill-maher-michele-bachmann-is-a-crazy-girl-with-mean-ideas/) of the former vice-presidential candidate, “She is not a mean girl. She is a crazy girl with mean ideas.” He recently made a joke about Rick Santorum’s wife using a vibrator (http://newsbusters.org/blogs/noel-sheppard/2012/02/18/bill-maher-makes-joke-about-rick-santorums-wife-using-sex-toy) . Imagine now the same joke during the 2008 primary with Michelle Obama’s name in it, and tell me that he would still have a job. Maher said of a woman who was harassed while breast-feeding at an Applebee’s, “Don't show me your tits!” as though a woman feeding her child is trying to flash Maher. (Here’s a way to solve his problem: don’t stare at a strangers’ breasts). Then, his coup de grâce: “And by the way, there is a place where breasts and food do go together. It’s called Hooters!”

Liberals—you know, the people who say they “fight for women”—comprise Maher’s audience, and a parade of high-profile liberals make up his guest list. Yet have any of them confronted him? Nope. That was left to Ann Coulter, who actually called Maher a misogynist to his face (http://jezebel.com/5819653/ann-coulter-calls-bill-maher-a-misogynist-to-his-face) , an opportunity that feminist icon Gloria Steinem failed to take when she appeared on his show in 2011.

This is not to suggest that liberals—or feminists—never complain about misogyny. Many feminist blogs now document attacks on women on the left and the right, including Jezebel, Shakesville, and the Women’s Media Center (which was cofounded by Steinem). But when it comes to high-profile campaigns to hold these men accountable—such as that waged against Limbaugh—the real fury seems reserved only for conservatives, while the men on the left get a wink and a nod as long as they are carrying water for the liberal cause.

After all, if Limbaugh’s outburst is part of the “war on women,” then what is the routine misogyny of liberal media men?

It’s time for some equal-opportunity accountability. Without it, the fight against media misogyny will continue to be perceived as a proxy war for the Democratic Party, not a fight for fair treatment of women in the public square.

If anyone can get all the way through this RIGHTEOUS article and provide me with a logical argument as to why there should be this double standard, I might think about giving you some money. Why would I do that? Because there's no way in hell I'm ever gonna have to cough up any dough, that's why. Once again, Powers nails it. Perfectly.
Posted by Aimeslee Winans at 3/05/2012 10:39:00 PM

It's so refreshing to find articles like the ones you post on your site. Very informative reading.

Hi, I just moved you to the middle column of Daily PUMA for better visibility. I don't believe in all (once a day) posting, or nothing (once every several months).

Even a post once a week to once a month is pretty cool. Hope to see you next article soon.

~Comments are now ON~

I love hearing from you! But, if you want to comment privately, here's my email addy: aimeslee@gmail.com I would LOVE for you to email me with any comments you may have, and several of my readers feel more comfortable doing that...so, please DO!

Get My Blog Emailed To You:

Other Web Spots I'm At: